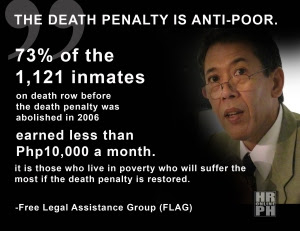 The FREE LEGAL ASSISTANCE GROUP [FLAG] strongly opposes the incoming government’s efforts to restore the death penalty and adopt and implement a “shoot-to kill” policy. These actions are illegal and unconstitutional, render our legal system impotent and meaningless, and blatantly violate international law.

The death penalty is anti-poor. Seventy-three percent (73%) of the 1,121 inmates on
death row before the death penalty was abolished in 2006 earned less than ten thousand pesos (Php10,000) a month. Eighty-one percent (81%), in addition, worked in low income jobs as sales, service, factory, agricultural, transport or construction workers.1 If these numbers are any indication, it is those who live in poverty who will suffer the most if the death penalty is restored.

The poor also bore the brunt of wrongful death penalty convictions. In the landmark
case of People vs. Mateo,2 the Supreme Court revealed that seventy-one percent (71%) of the death sentences handed down by the trial courts were wrongfully imposed. This
means that 7 out of 10 convicts on death row–-most of them poor–-were wrongfully
convicted and did not deserve to be there.

The death penalty and “shoot-to-kill” policy—coupled with the President-elect’s
proposal to employ death by hanging “until the head is completely severed from the
body”3—reflect a callous disregard for human dignity not befitting a Chief Executive.
The Constitution, the Code of Conduct of Public Officials and Employees, and other
laws impose on all public servants the duty to observe, respect, and promote human
rights. Advocating state-sanctioned killings is not just anti-poor but anti-life.
The death penalty and “shoot-to-kill” policy, moreover, will not deter crime–only the
certainty of being caught and punished can do that. What the country needs is a better
justice system–not a new one based on the barrel of a gun.

The restoration of the death penalty blatantly violates international law.

This has already happened with Liberia, which restored the death penalty after ratifying the Second Optional Protocol. Liberia has had no executions since ratifying the Second Optional Protocol, however. Given that article 1(2) of the Protocol says, ‘Each State Party shall take all necessary measures to abolish the death penalty within its  jurisdiction.’, merely enacting legislation for the death penalty, even if it is not imposed, constitutes a breach of the Protocol and therefore of the Covenant.

If the Philippines reinstates capital punishment (after having ratified the Second Optional Protocol), the country would be condemned for violating international law. It would be a great stigma.

The shoot-to-kill policy disregards rights guaranteed by the Constitution.

The 1987 Constitution categorically mandates that “[n]o person shall be deprived of
life, liberty, or property without due process of law.”6 The Constitution further guarantees the right to be presumed innocent, to be heard, to counsel, to be informed of the nature and cause of the accusation against him/her, to have a speedy, impartial,
and public trial, to meet the witnesses face to face, and to have compulsory process to
secure the attendance of witnesses and the production of evidence in his/her behalf.
These rights are brushed aside by the shoot-to-kill policy.

The shoot-to-kill policy gives unbridled discretion to law enforcement officers to take
the law into their own hands and act as judge, jury, and executioner. It contravenes
Article 11(1-3) of the Revised Penal Code which authorizes police officers to use deadly
force only when it is reasonably necessary. In the words of Justice Antonio Carpio of the Supreme Court—

[…] a policeman is never justified in using unnecessary force or in treating the
offender with wanton violence, or in resorting to dangerous means when the
arrest could be affected otherwise.7

FLAG, therefore, calls upon the President-elect to abandon his plans to restore the death penalty and  impose a “shoot-to-kill” policy.