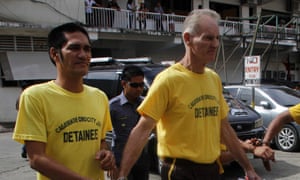 ‘Reading an account of the crimes Peter Scully (right) is accused of, it would be hard not to lapse into fantasies of revenge if he’s found guilty.’ Photograph: STR/AFP/Getty Images

THERE have been calls to reintroduce the death penalty in the Philippines as the trial of alleged Australian child sex abuser Peter Scully takes place and horrific details of the crimes he is accused of emerge.

There have been calls to reintroduce the death penalty in the Philippines as the trial of alleged Australian child sex abuser Peter Scully takes place and horrific details of the crimes he is accused of emerge.

The abolition of the death penalty in south-east Asia isn’t so much a movement that has swept through the region as a fragile mosaic. In the countries that don’t execute the line is held – but tenuously. And in some countries where they do execute, there’s the sense that it could turn. There are unofficial moratoriums or death sentences handed out that don’t lead directly to the gallows, just a lifetime in jail.

Japan has the death penalty and its use is shrouded in secrecy, but the Japan Federation of Bar Associations, whose membership includes 37,000 lawyers, said it would declare its opposition to the death penalty at a meeting in early October due to growing concern over miscarriages of justice.

Thailand continues to regularly sentence people to death, however executions are rare, with no lawful executions since 2009.

Executions have been on hold in Vietnam because the government cannot acquire the drugs used for lethal injection (pharmaceutical companies that manufacture the drugs have refused to supply their medicines for such means).

Indonesia has the death penalty. After a lengthy informal moratorium under former president Susilo Bambang Yudhoyono, the killings resumed again in 2014.

After Ferdinand Marcos was deposed in 1986, the Philippines abolished the death penalty via a newly drafted constitution. But there was a “get out” clause allowing congress to reinstate it “hereafter” for “heinous crimes”.

As the first country in Asia to abolish the death penalty, the Philippines played an important role in the region, signalling a move away from pre-modern forms of punishment. Abolitionists hoped the removal of the death penalty in the region would act as a sort of nudge or cause a domino effect.

In the absence of a nudge, abolition of the death penalty could be posited as an entry into a trading bloc or partnership. Having capital punishment on your statute books is a barrier to entering the EU, for example. Turkey abolished the death penalty in a bid to qualify for membership, although there has been talk of bringing it back following the July coup attempt.

It can easily be assumed that progress towards enlightenment is linear. We abolish capital punishment and we don’t go back. We don’t go back even when the mob and the media are begging for it.

If you accept, as I do, that the abolition of the death penalty is a move towards a more enlightened, humane, civilised and less barbaric society, then opposition to the death penalty must occur regardless of individual cases that grip and even sicken the public imagination. Which brings us to the case of alleged Australian paedophile, Peter Scully.

Reading an account of the crimes he is accused of (he is pleading not guilty), it would be hard not to lapse into fantasies of revenge if he’s found guilty – to want him to be made to suffer horribly and even more; that he be eradicated, dissolved, removed from the world. Murder is murder. Child abuse is stealing someone’s life from them. What other punishment could be fitting? And yet …

Nietzsche’s warning that “he who fights with monsters might take care lest he thereby become a monster” is true here.

And more. Bringing back a flawed system to kill a rotten individual means that we dispense with the individual but are stuck with the system.

This is a system – as the United States is finding out more and more with advanced DNA technology – that executes the wrong people, or executes poorly – many long minutes between the first dose of the drug, or the first wave of the shock and the prisoner pleading for death, then finally the death.

Even if all goes “well”, it is possibly the most cruel and unusual punishment to have the time and date of your death fixed by the state. You know when you will die and by what means, and each minute of waiting until that moment must of course be filled with terror and dread.

But it need not be this way. Christopher Hitchens wrote:

… it is possible to eliminate the execution of the innocent, simply by joining the association of countries that have dispensed with the death penalty.

Those in the international community who have been appalled by the spate ofextrajudicial killing by the Duterte government in the Philippines must surely also be appalled by talk of reintroducing capital punishment. This is frontier justice not just at night, on the borders, but brought right into the daylight and given the centre seat in the justice system.