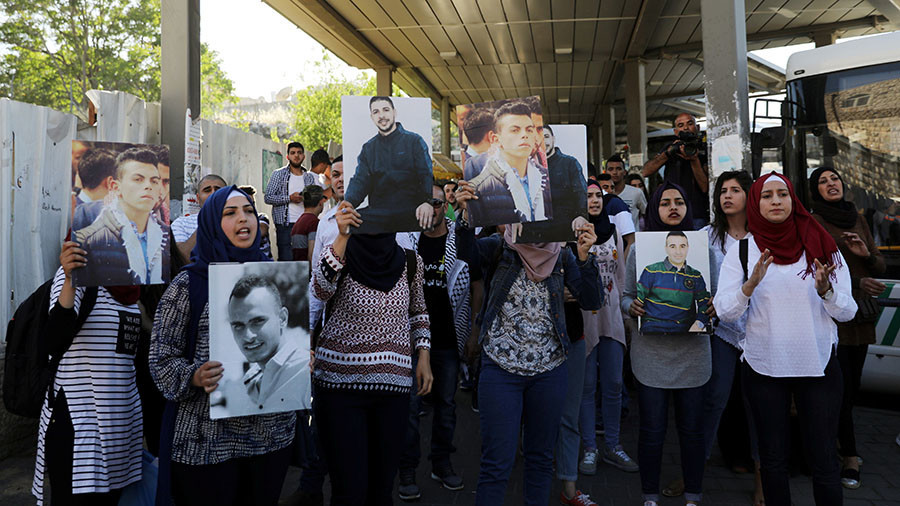 Palestinian women take part in a demonstration in support of Palestinian prisoners held in Israeli jails, outside Jerusalem’s Old city April 29, 2017. © Ammar Awad / Reuters
Despite massive opposition from Israeli lawmakers, Prime Minister Benjamin Netanyahu was influential in the Knesset’s decision to support a bill that would allow both military and civil courts to sentence terrorists to death.

In a narrow 52-49 vote, Israel’s parliament, the Knesset, approved the first draft of a bill which could make it easier for terrorists to be handed the death penalty. Current military law allows a person to be sentenced to death for an act of terrorism, but only if such a sentence has the unanimous support of all three sitting judges.

The new draft legislation seeks to amend the current order, and wants it replaced by a simple majority decision of the judges. The bill, sponsored by Defense Minister Avigdor Lieberman, also aspires to expand the potential use of death penalty beyond the military courts, seeking its application in Israeli civil courts. Israel has carried out only two executions in its modern history.

The current proposed regulations does not single out any religion or ethnicity, and if adopted, would apply to both Jewish and Palestinian terrorists. The Israeli definition of “terrorism” however, is rather broad and includes, for instance, knife attacks on military personnel, which are often committed by teenagers. In August 2016, Israeli lawmakers approved the so-called Youth Bill, legalizing the imprisonment of Palestinian minors as young as 12, should they be are suspected of grave crimes, such as acts of terrorism against the state of Israel. While the draft law still has to pass through three more readings, the age of the “terrorists” has not yet been discussed.

Fierce debates Wednesday, however, raged around the ethical application of the death penalty and its compatibility with Judaism. While Judaism allows for capital punishment, Talmudic law as followed by ultra-Orthodox members of the Jewish community argues that the death penalty ceased with the destruction of the Second Temple in 70 CE. Following their religious conviction, members of the ultra-Orthodox United Torah Judaism party walked out before the vote to consult with rabbis on the issue.

Netanyahu voiced support for the bill, despite the fact that previous Israeli governments, including those headed by him, have rejected all prior death penalty initiatives. “There are extreme cases, where people commit terrible crimes and don’t deserve to live,” the PM argued. “We’re changing the law for these situations.”

Netanyahu’s stance was supported by MK Yisrael Beytenu who proposed the bill. He said, “When terrorists sitting in Israeli prisons end up going free [in prisoner exchanges], I think the most moral thing is for [terrorists] to get the death penalty.”

Others, however, voiced strong opposition to the proposed capital punishment legislation. “The death penalty will not contribute anything to the war on terrorism,” said MK Eyal Ben-Reuven. “The opposite is true. Instead of deterring, it will strengthen the terrorists, who will turn into shaheeds [Arabic for martyr]. Israel has proven abilities to deal with terrorism without giving up on the strength in our values and without using our enemies’ methods.”

Opposition lawmaker Tzipi Livni called the bill “reckless, 100 percent politics,” adding, that “The defense establishment opposes the death penalty.” Just prior to the vote, the head of Israel’s internal security service (Shin Bet) Nadav Argaman also voiced strong opposition, noting that the “terrorist death penalty law will lead to wave of kidnappings” of Jews around the world to force Israelis to release convicted Palestinian prisoners before they are executed.

Wednesday’s vote was already slammed by the European Union’s ambassador to Israel. “The death penalty is incompatible with human dignity. It constitutes inhuman and degrading treatment, does not have any proven deterrent effect and allows judicial errors to become irreversible & fatal,” the EU mission said on Twitter.

In August, a poll published by the Jerusalem-based Israel Democracy Institute found that 70 percent of Israeli Jews “strongly” or “moderately” supported the death penalty.  – RT News, 4/1/2018

The Israeli government‘s proposal to make it easier for judges to hand out the death penalty for “terrorist activity” has been condemned as “fascist” by Palestinian politicians and rights groups, who fear it will give Israel legal cover to target Palestinians.

A bill to amend existing legislation regulating the use of the death sentence passed its preliminary reading in Israel’s parliament, the Knesset, on Wednesday with backing from Israeli Prime Minister Benjamin Netanyahu’s ruling coalition.

Aida Touma-Suleiman, a Palestinian citizen of Israel and member of the Knesset, told Al Jazeera on Friday that while the bill does not specify any group, it is “intended mainly for the Palestinian people”.

“It’s not going to be implemented against Jews who are committing terrorist attacks against Palestinians for sure,” she said, describing the bill’s authors as “extreme right”.

“This is a fascist bill, contributing to an atmosphere of fascism inside Israeli society, which is directed towards Palestinians.”

Under existing laws, Israel’s civilian courts reserve the use of the death penalty for Nazis and Nazi collaborators convicted of committing murder during the Holocaust, while military courts can hand out the sentence if a panel of three judges unanimously agrees to issue the punishment.

The proposed changes will add an additional clause to Israel’s penal law, allowing the death penalty to be used against those convicted of “terrorist activity”, which is defined by the bill as “a deliberate attempt to murder civilians in order to achieve political, national, religious or ideological objectives.”

It will remove the requirement for military court panels to unanimously agree on issuing the punishment, instead requiring a simple majority of two of the three judges.

When asked by Palestinian Knesset member Ahmad Tibi on Wednesday about whether the law would apply to Jews who carry out attacks, such as “those who burned the children in Duma”, Netanyahu replied: “In principle, yes.”

Tibi’s reference was to a 2015 arson attack carried out by a Jewish settler in the occupied West Bank village of Duma, which left three Palestinians, including a one-year-old baby, dead and another child seriously wounded.

Dawoud Yusef of the Palestinian rights group Addameer, which advocates for Palestinian prisoners held by Israel, cast doubt on Netanyahu’s assertion that the move would also apply to Jews.

“What we’ve seen in the past is that Avigdor Lieberman has been pushing for this as part of his agreement to join Netanyahu’s coalition,” Yusef said, referencing Netanyahu’s defence minister and hard-right coalition partner.

“He’s come out and said that this will only apply to Arabs. When he says Arabs, we assume he means Palestinian citizens of Israel and Palestinians in the West Bank and Gaza.”

Lieberman, whose party Yisrael Beiteinu (Israel Our Home) put forward the bill, has in the past advocated the use of the death penalty against “Arab terror”, and in a Facebook post about the bill on Wednesday, the minister declared: “Jewish blood is not cheap.”

Yusef said if the bill ends up passing, it would represent a “slippery slope”.

“We really see this as a pandering to the extreme elements in the Israeli government and we’re not sure in the current climate, where that’s going to end.”

Given Israel’s position as occupying power, its biased judicial system against Palestinians, and precedence over the years, such a bill can only be read to target Palestinians who Israel characterises as terrorists, a term whose definition in Israel is so broad and encompassing.

“It should be noted that most Palestinian political detainees are tried by Israeli military courts,” she said.

“Given Israel’s position as occupying power, its biased judicial system against Palestinians, and precedence over the years, such a bill can only be read to target Palestinians who Israel characterises as terrorists, a term whose definition in Israel is so broad and encompassing.”

While Israel has a long history of carrying out targeted assassinations of its opponents, judicial executions are very rare.

In 1948, the Israeli army court-martialed and executed Meir Tobianski after accusations that he had passed on intelligence to the Jordanian army, but the officer was later posthumously exonerated of the charges.

In 1962, the state executed the former SS commander Adolf Eichmann for his part in the Holocaust. SOURCE: Al Jazeera News, 5/1/2018

JERUSALEM (Reuters) – Israel’s parliament gave preliminary approval on Wednesday for legislation that would make it easier for a court to impose a death sentence on assailants convicted of murder in attacks classified as terrorism.

FILE PHOTO: Israeli lawmakers attend a vote on a bill at the Knesset, the Israeli parliament, in Jerusalem February 6, 2017. REUTERS/Ammar Awad/File Photo

Israeli military courts – which handle cases involving Palestinians in the occupied West Bank – already have the power to issue the death sentence, although this has never been implemented. The only case of an execution in Israel was carried out against convicted Nazi war criminal Adolf Eichmann in 1962.

The amendment to the penal code would still require three more readings if it is to become law. Currently, a death penalty can only be imposed if a panel of three military judges passes sentence unanimously. If the amendment is adopted, a majority verdict would suffice.

Wednesday’s motion was brought by Defence Minister Avigdor Lieberman, an ultra-nationalist in the conservative coalition government, who advocates tough action against Palestinian militants. Fifty-two of parliament’s 120 members voted in favor, and 49 were opposed.

Qadoura Fares, chairman of the Palestinian Prisoner Club which represents Palestinians jailed in Israel, denounced the vote as ”an expression of the state of blindness and confusion in the policies of this fascist regime (where) extremist parties race to pass racist laws.

“While the world moves toward repealing the death penalty, Israel is working to ratify this law, which is directed against the Palestinians,” Fares told Reuters.

Israeli Prime Minister Benjamin Netanyahu voted for the motion but said that such legislation required deeper discussion and that the matter would now be considered at ministerial level before further debate in the Knesset.

In remarks to lawmakers, he said: “I think that in extreme cases, when somebody slaughters and laughs (as he kills), he should not spend the rest of his time in jail and should be executed.”

Asked by an Israeli Arab lawmaker whether he would also apply this reasoning to Jewish militants convicted of killing Palestinians, Netanyahu said: “In principle, yes.”

The successful vote was the latest in a number of motions brought by right-wing coalition members who feel able to pressure Netanyahu’s brittle government into enacting hard-line legislation. – Reuters, 3/1/2018