A decade after condemning to death six nomadic tribe members for murder and rape, SC finds them innocent 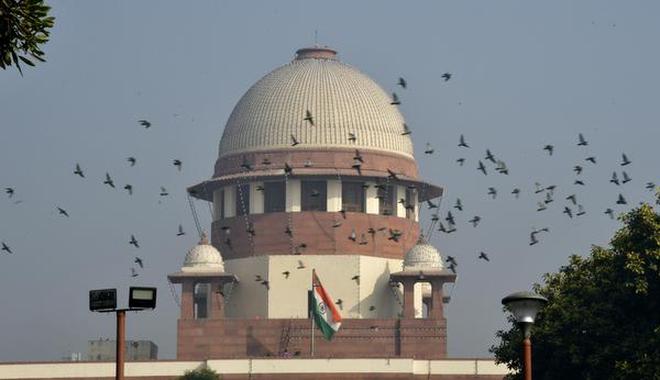 A view of the Supreme Court in New Delhi   | Photo Credit: R.V. Moorthy

Ten years after after condemning to death six nomadic tribe members in a rape and murder case, the Supreme Court on Tuesday found them innocent and ordered the Maharshtra Police to hunt down the real criminals.

In a complete volte-face, the apex court ordered the immediate release of Ankush Maruti Shinde, Rajya Appa Shinde, Ambadas Laxman Shinde, Raju Mhasu Shinde, Bapu Appa Sinde and Surya alias Suresh for the murder of five members of a family, rape of a woman and her 15-year-old daughter and dacoity in Nashik.

They had spent over 16 years in jail in anticipation of death. The court said the six men were falsely implicated and roped in by the police. One of the six was a juvenile at the time of his arrest. Some of them have developed psychiatric symptoms due to the long years in solitary confinement. They had not been eligible for pardon or furlough as they were condemned men.

The apex court Bench of Justices A.K. Sikri, S. Abdul Nazeer and M.R. Shah specifically takes the case of Ankush Maruti Shinde, who was subsequently found to be a juvenile.

“Dr. Ashit Sheth, Shinde’s psychiatrist, clearly opined that he lived under sub-human conditions for several years. He was kept in isolation in solitary confinement with very restricted human contact and under perpetual fear of death. He was only allowed to meet his mother, and that too only infrequently. He was not even allowed to mix with other prisoners. Therefore, all the accused remained under constant stress and in the perpetual fear of death,” Justice Shah described.

The court ordered the Maharashtra government to pay each of the six men a compensation of ₹5 lakh.

The court turned its ire on the State Police force for trauma it unleashed on the men, who belonged to both socially and financially backward communities. The court highlighted how the police did not bother to even investigate the fact that an eye-witnesses had, immediately after the crime was committed, identified four other men from the rogues’ gallery as the perpetrators of the crime. There has been no effort from the side of the police made to find these four men. The court ordered the Maharashtra Chief Secretary to take disciplinary action against the probe officers within three months.

The acquittal of the six men is, however, a U-turn for the Supreme Court too. In 2009, the court had dismissed their appeals and found them all guilty enough to be sent to the gallows.

However, luck changed for the six men when they filed their review petitions against the 2009 judgment. In October 2018, the court decided to recall its 2009 verdict and hear their appeals afresh. This change of mind by the court has now finally proved their innocence. – The Hindu, 5/3/2019

The Supreme Court on Monday acquitted three persons who were sentenced to death by it in 2009, and also three others whose death penalty was confirmed by it.
The bench comprising Justice AK Sikri, Justice S. Abdul Nazeer and Justice MR Shah, also ordered the State of Maharashtra to pay Rupees 5 Lakh as damages to each of them.
Ankush Maruti Shinde, Rajya Appa Shinde, Ambadas Laxman Shinde, Raju Mhasu Shinde, Bapu Appa Shinde and Surya alias Suresh were accused of committing five murders and raping a lady (who survived) and a child of 15 years of age (who died).
The Trial Court convicted all of them and sentenced them to death.
In the appeals filed by them, the Bombay High Court set aside death penalty awarded to three of them and instead sentenced them to life imprisonment. While for the remaining three, the death sentence was confirmed.
The Supreme Court bench comprising of Justice Arijit Pasayat and Justice Mukundakam Sharma, in 2009, not only dismissed the appeals filed by the three whose death sentence was confirmed by the High court, but also allowed State’s appeal and sentenced the other three to death sentence.
The Supreme Court had found the crime to be cruel and diabolic. It had observed that the collective conscience of the community was shocked; the victims were of a tender age and defenseless; the victims had no animosity towards the accused and the attack against them was unprovoked. Considering these factors,it had awarded the death penalty to all the accused .
In 2010, review petitions filed by three accused were dismissed by the Supreme Court.
In February 2014, a bench of Justices A.K. Patnaik and Ibrahim Kalifulla admitted the review petitions filed by the other three death convicts, accepting the arguments of Senior Advocate Soli Sorabjee that it was decided relying on a wrong precedent- Ravji alias Ram Chandra v. State of Rajasthan [(1996) 2 SCC 175]. It was argued that Ravji’s case and the six subsequent cases in which Ravji was followed were decided per incuriam, as the law laid down therein is contrary to the law laid by the Constitution Bench of the Supreme Court in Bachan Singh.
In 2016, the three accused, whose review petitions were dismissed in 2009, filed applications for reopening the review petitions, in the light of constitution bench judgment in Mohd. Arif v Registrar, Supreme Court of India.
In October 2018, considering the review petitions and the applications, a three Judge Bench headed by Justice Kurian Joseph had recalled the 2009 Judgment and the Appeals were restored.
Read Judgment at https://www.livelaw.in/top-stories/sc-acquits-death-row-convicts-143331

Back to life: on the belated acquittal of death row convicts

It is a tale of Kafkaesque horror. Six members of a nomadic tribe spent 16 years in prison in Maharashtra; three of them were on death row for 13 of these years, while the other three faced the gallows for nearly a decade. One of them was a juvenile at the time of the offence. And all this for a crime they did not commit. The only silver lining for the six convicts is that even though 10 years had elapsed since the Supreme Court imposed the death penalty on them, the sentence was not carried out. Hearing on their review petitions became an occasion for another Bench of the Supreme Court to revisit the 2009 verdict. A three-judge Bench has now found that unreliable testimony had been used to convict the six men. One of the two eyewitnesses had identified four others from police files as members of the gang that had raided their hut in 2003, but these four were not apprehended. The gang had stolen ₹3,000 and some ornaments, killed five members of the family, including a 15-year-old girl, who was also raped. It is possible that the heinous nature of the crime had influenced the outcome of the case. The belief that condign punishment is necessary for rendering complete justice could be behind courts brushing aside discrepancies or improvements in the evidence provided by witnesses. On a fresh hearing of the appeals, the court has concluded that the accused, who were roped in as accused in this case after being found to be involved in an unrelated crime elsewhere, were innocent.

The case, in itself, holds a strong argument against the retention of the death penalty on the statute book. Had the sentence against these six been carried out, the truth would have been buried with them. In recent years, the Supreme Court has been limiting the scope for resorting to the death penalty by a series of judgments that recognise the rights of death row convicts. A few years ago it ruled that review petitions in cases of death sentence should be heard in open court. In a country notorious for “the law’s delay”, it is inevitable that the long wait on death row, either for a review hearing or for the disposal of a mercy petition, could ultimately redound to the benefit of the convicts and their death sentences altered to life terms. In a system that many say favours the affluent and the influential, the likelihood of institutional bias against the socially and economically weak is quite high. Also, there is a perception that the way the “rarest of rare cases” norm is applied by various courts is arbitrary and inconsistent. The clamour for justice often becomes a call for the maximum sentence. In that sense, every death sentence throws up a moral dilemma on whether the truth has been sufficiently established. The only way out of this is the abolition of the death penalty altogether. – The Hindu, Editorial, 7/3/2019