BRUNEI’S sultan said Sunday a moratorium on capital punishment will also extend to sharia laws that include stoning to death for gay sex and adultery, after a furious backlash against the punishments.

It was the first time Sultan Hassanal Bolkiah had commented publicly on the new penal code since it fully entered force last month, and his remarks appeared aimed at assuaging worldwide criticism.

The laws, which also include amputation of hands and feet for thieves in the tiny sultanate on Borneo island, sparked fury from celebrities, including actor George Clooney, the United Nations and rights groups.

In a televised speech ahead of the start of the Muslim holy month of Ramadan, the sultan said: “I am aware that there are many questions and misperceptions with regard to the implementation of the (sharia penal code).”

“There should not be any concern on the sharia law as it is full of Allah’s mercy and blessings,” he said, according to an official translation of his address.

“As evident for more than two decades, we have practised a de facto moratorium on the execution of death penalty for cases under the common law.

“This will also be applied to cases under the (sharia penal code), which provides a wider scope for remission.”

He also vowed Brunei would ratify the United Nations convention against torture which it signed several years ago.

Muslim-majority Brunei operates a dual-track legal system with civil courts operating alongside sharia courts that handle issues such as marital and inheritance cases.

Some crimes were already punishable with death by hanging under the civil code but Brunei has not executed anyone for decades, and the sultan’s comments suggest this will not change with the introduction of the new sharia laws.

Rape and robbery are also punishable by death under the sharia code and many of the new laws, such as capital punishment for insulting the Prophet Mohammed, apply to non-Muslims as well as Muslims.

The sultan — one of the world’s wealthiest men — announced plans for the sharia penal code in 2013.

The first section was introduced in 2014 and included less stringent penalties, such as fines or jail terms for offences including indecent behaviour or skipping Friday prayers.

But the introduction of the harsher punishments in the former British protectorate of about 400,000 people was repeatedly delayed after they sparked criticism. 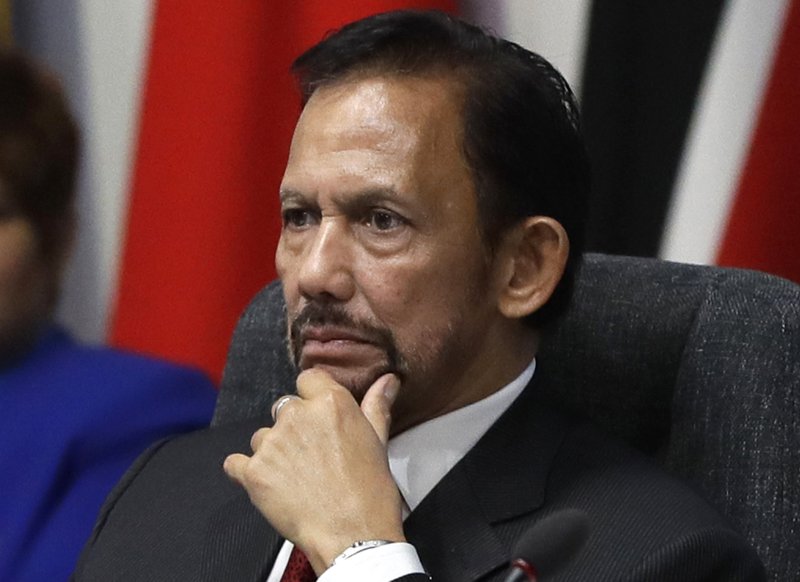 FILE – In this April 19, 2018, file photo, the Sultan of Brunei Hassanal Bolkiah listens during the first executive session of the CHOGM summit at Lancaster House in London. Brunei’s sultan has said a moratorium on capital punishment is in effect for new Shariah criminal laws including stoning people for gay sex and adultery that sparked an international outcry. Sultan Hassanal Bolkiah said Sunday, May 5, in a speech to mark the start of Ramadan that he was aware of the “many questions and misperceptions” over the penalties provided for under new sections of Brunei’s Shariah Penal Code, but stressed that there should be no fear.(AP Photo/Kirsty Wigglesworth, File)

KUALA LUMPUR, Malaysia (AP) — Brunei’s sultan has said a moratorium on capital punishment is in effect for new Shariah criminal laws including stoning people for gay sex and adultery that sparked an international outcry.

The United Nations has called the laws implemented April 3 “draconian” while the U.S. and several other countries have urged Brunei to halt its plans. Celebrities including George Clooney, Elton John and Ellen DeGeneres have rallied for a boycott of nine hotels in the U.S. and Europe linked to Brunei.

Even before 2014, homosexuality was already punishable in Brunei by a jail term of up to 10 years. The new laws say those found guilty of gay sex can be stoned to death or whipped. Adulterers risk death by stoning too, while thieves face amputation of a right hand on their first offense and a left foot on their second. The new laws apply to children and foreigners, even if they are not Muslim.

Sultan Hassanal Bolkiah said Sunday in a speech to mark the start of Ramadan that he was aware of the “many questions and misperceptions” over the penalties provided for under new sections of Brunei’s Shariah Penal Code, but stressed that there should be no fear.

Brunei has had a “de facto moratorium” on capital punishment for over two decades and “this will also be applied to cases under the (Shariah laws) which provides a wider scope for remission,” he said. The announcement came as a surprise but appeared aimed at deflecting criticism that Islamic criminal laws are cruel.

“We are conscious of the fact that misperceptions may cause apprehension. However, we believe that once these have been cleared, the merit of the law will be evident,” the sultan said. Sultan Hassanal said Brunei will also ratify the U.N. Convention Against Torture to show its commitment to human rights.

“Both the common law and the Shariah law aim to ensure peace and harmony of the country. They are also crucial in protecting the morality and decency of the public as well as respecting the privacy of individuals,” he added.

In an immediate reaction, Commonwealth Secretary-General Patricia Scotland on Monday hailed the moratorium on the death penalty but also urged Brunei to revoke other harsh punishments such as amputation and flogging. Brunei is a member of the Commonwealth.

Sultan Hassanal instituted the Shariah Penal Code in 2014 to bolster the influence of Islam in the oil-rich monarchy of around 430,000 people, two-thirds of whom are Muslim. There has been no vocal opposition to the new penalties in Brunei, where the sultan rules as head of state with full executive authority. Public criticism of his policies is extremely rare in the country. – AP, 5/5/2019