ADPAN is conducting a series of training on the death penalty in Malaysia. The second on our series will be on “Amicus Curiae and Handling Death Penalty Cases in Malaysia”

Khaizan Sharizad (Sherrie) is a practicing lawyer in Kuala Lumpur, Malaysia. She is a Partner at Messrs. Seira & Sharizad in Kuala Lumpur. Her practice is mainly on Corporate and Commercial Litigation, Administrative Law as well as Criminal Law.

Sherrie is also a filmmaker, a member of the Freedom Film Network Malaysia with a special interest in highlighting human rights and public interest issues in her documentaries. She is the winner of the Freedom Film Festival Malaysia Award (2009) organised by Pusat KOMAS, as co-director together with Seira Sacha Abu Bakar of the documentary film titled “No Silver Lining: The Perak Crisis” (2009) and co-directed three other documentary films, “Death in Dilemma: The Final Curtain” (2011),  “Ombak Perubahan: Pergerakan Sosial Di Malaysia” (2012) and “Menunggu Masa”(2018).

Suzana Norlihan Alias is a criminal defence lawyer with practice experiences of more than 20 years and a member of the Human Rights Committee of the Malaysian Bar Council.

Suzana advocates on a wide range of criminal matters and has in the past, advocated on the case of torture and abuse in detention and commonly undertake probono litigations. Apart from her contribution as a lawyer, Suzana is also a distinguished speaker on issues relating to the death penalty and criminal law was invited to speak at the World Congress against the Death Penalty and Meeting of International Justice Ministers.

For advocates and solicitors participating from Malaysia, details on CPD point accreditation will be provided soon. 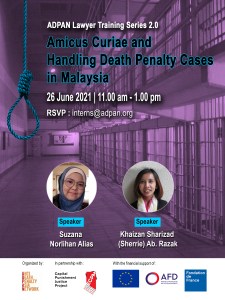