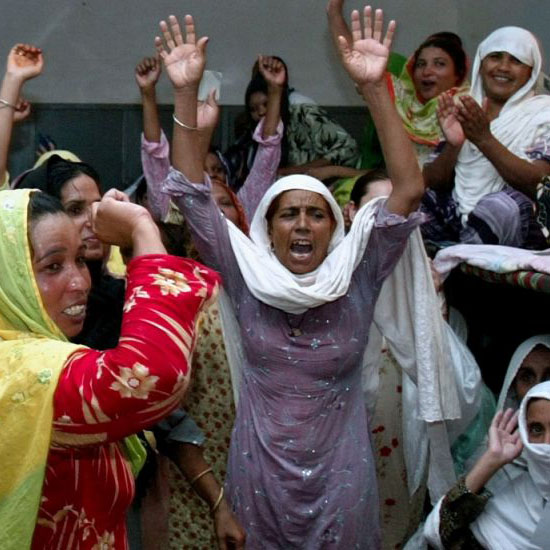 Posted at 05:00h in News, Pakistan by adpan 0 Comments
Share

FILE – In this July 8, 2006 file photo, women prisoners celebrate the news of their release on bail, at Adiala Jail in Rawalpindi, Pakistan. Kanizan Bibi, charged with murdering her employer’s wife and five children, remains a prisoner on death row for the last 29 years. She’s one of more than 600 mentally ill prisoners in Pakistan’s overcrowded prisons. (AP Photo/Anjum Naveed,file)

ISLAMABAD (AP) — Kanizan Bibi was 16 when she was charged with murdering her employer’s wife and five children. The police said she was having an affair with her employer, who was also arrested and later hanged.

Until his execution in 2003, Khan Mohammad swore he and Bibi had never had an affair and had not killed anyone. He maintained his wife and children were killed as payback in a long-running land dispute with his relatives.

Yet Bibi, who was diagnosed with schizophrenia in 2000, remains on death row, where she has been for 29 years.

The Cornell Center on the Death Penalty Worldwide is spearheading efforts along with the independent Justice Project Pakistan to get Bibi released. But the coronavirus pandemic that has shut down most of Pakistan seems to have also shut down Bibi’s chance at freedom.

She’s one of more than 600 mentally ill prisoners in Pakistan’s overcrowded prisons. A March 30 hearing to present yet another psychiatric evaluation was postponed when courts closed.

Most days Bibi can barely dress herself. She hasn’t spoken in more than a decade and her father, before he died in 2016 pleaded in a letter to Pakistan’s president to free his only child.

“My daughter was accused of murder, which was a lie,” he wrote telling of how she was tortured in police custody.

“They hung her from a fan with ropes thicker than her tiny wrists, beating her small frame with all their might. They let mice loose in her pants, which they tied from the ankles so that they could not escape. Kanizan had been terrified of mice her whole life,” he wrote. “I am a poor man and I beg that the death sentence of my daughter be converted into life in prison.”

He never received a reply.

Justice Project Pakistan this week warned of a steep rise in COVID-19 cases in Pakistan’s crowded jails. The Supreme Court of Pakistan this week agreed to release some mentally ill and disabled prisoners to ease conditions, but only those whose sentences are less than three years.

That meant Bibi had to remain in prison.

A land dispute between relatives was at the center of her case. Her employer’s cousins had been feuding with him over land and had originally been arrested for the murders. They pointed to Bibi and accused her of adultery, a crime of shame in conservative Pakistan, saying that’s why she killed her employer’s wife and children. In villages adultery can bring summary executions by family members.

Bibi was accused of involvement in the killings and charged with murder. Unsubstantiated adultery claims and a confession elicited after days of torture were enough for the judge to sentence her to death.

Delphine Lourtau, who heads the Cornell Center on Death Penalty Worldwide said the group’s research showed that women often aren’t just punished for crimes they are being charged with “but also for transgressing gender norms.”

“She has lost touch with reality and is oblivious to her surroundings. There are days when she is unable to eat or dress herself. She trembles, hears voices, and is rarely able to recognize family members,” the Cornell Center said.

This story has been corrected to show that the employer’s name was Khan Mohammad, not Sher Mohammad. – Yahoo News, 10/4/2020